One of the first unsolved problems I can remember, is probably from when I was about 10. I wanted to connect loose wires to a headphone plug. I don't exactly remember why. Maybe I was splitting a signal to 2 headphones. Anyway, I remember it being a complete pain in the ass. I'd try to twist the wires onto the 3 contacts on the plug in various ways and they'd always slip to one side and short across contacts.

Eventually I grew up, bought splitters, learned to solder, and otherwise moved past this problem.

On a recent flight, I had this classic situation again: the stupid plane had the weird old headphone jacks which have 2 mono 1/8" jacks instead of the standard single stereo jack. This means you can't plug normal headphones into them and hear sound in both ears. Of course the headphones they gave out which plug into these jacks sounded like crap. Unacceptable.

I ripped apart the plane headphones and tried to figure out how to connect them to my nice ones in a way that wouldn't screw up 10 minutes into my movie. Low and behold, I came up with a pretty damn good solution! I used pieces of insulation to tie bands around the connector in a way that both held the wires in place, and prevented them from shorting!

You may notice that the tip doesn't need a band to keep the wire from falling off because it narrows at the end away from the tip so the wire stays in that indented area. 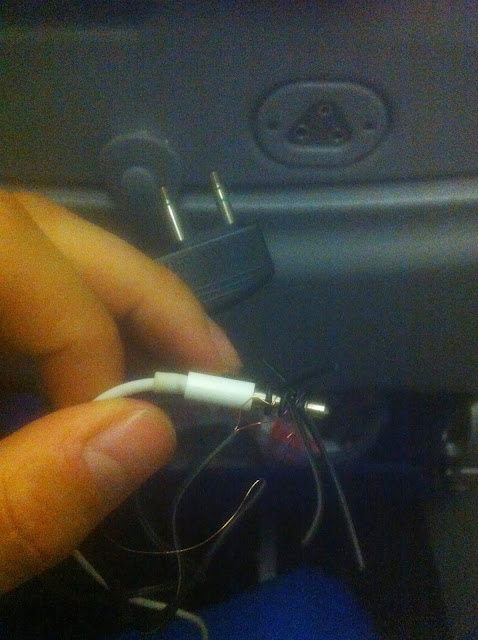 It was so satisfying to be able to use my upgraded problem solving skills to solve the oldest technical problem I can remember having!